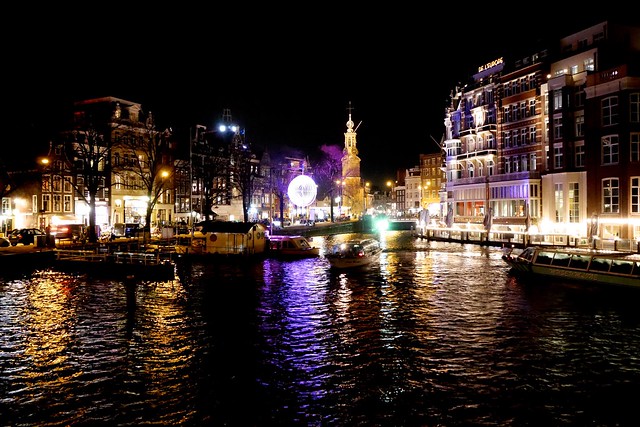 I’d been riding out the acid I took earlier that day, taking in the swirls and swoops of the waters of the Amstel, still reeling from van Gogh’s “Wheatfield with Crows,” which I’d only just seen in person for the first time that day. I’d left my first wife the week before, moved into a hotel in De Wallen with nothing more than a suitcase, and had been tripping pretty much constantly since that moment.

I didn’t plan on it, but I ended up sitting in that museum for five hours or more, staring only at “Wheatfield with Crows,” weeping and trying to cover up my tears so I wouldn’t get kicked out. I’d been kicked out before, and had had to cycle through disguises to keep them off my back. I couldn’t tell if I was weeping because of the painting or because of the fact that I’d just left my wife, was living out of a hotel, and had been riding out a bad trip that seemed like it would last forever. Maybe both. But that’s what I did, until the museum closed, and I was left to my own devices, wandering the streets of my hometown, my melancholy Amsterdam.

I think subconsciously I knew I was going to break up with her then, because I hadn’t taken acid in a while, eliminating my tolerance without consciously planning to, getting myself ready to be fucked up by the acid and the swirls of the Amstel and those fucking crows that were forever flying on a piece of canvas that had been attacked by strokes of paint by a guy perhaps more fucked up than I, or at the very least a whole hell of a lot more talented. I shamelessly cribbed his ideas for the majority of my early work, anyway. Only found my own vision after everything fell apart. It’s funny how things work out like that.

The way the streetlights shone against the nighttime water of the Amstel, I might as well have been looking into a sky below me. I bared my feet slowly, first removing my laces, tossing those into the water, then each shoe. In my mind, I was letting these things go, the same way I dropped my key in my wife’s hand, most of my belongings in the trash. Everyone was about Zen and minimalism back then, so I was able to frame it that way in my mind. If it was my choice, then it wasn’t sad.

Drizzle collected in a sheet on the pavement, and that collected on my bare feet when I eventually left the shores of the Amstel and went walking, collecting stares from those who assumed that I was homeless. They weren’t too far off the mark, but I found myself offended anyway. When they really annoyed me, I pretended to be assailed by voices telling me to kill and maim, shouting at them to leave me alone. Their faces when I said these things were priceless.

The local cinema had a midnight showing of Eraserhead for only a couple of guilders, so I went and saw it for the first time like that, still tripping, somehow getting past the staff without them noticing my lack of shoes. Maybe they noticed and didn’t care. I find that more likely. The film’s industrial soundscape seemed to come from everywhere. The smoke, and the shadows, and the iconic shape of Henry’s hair seared into my brain for future recall. The terrifying family dinner, the hideous mutant child, the deformed lady in the radiator. I let it all wash over me as my still chilly feet gently warmed in the cinema’s heat.

When the film finished, I walked slowly back to the hotel that was now my home, imagining that every wisp of smoke was an effect that David Lynch had meticulously planned. A street corner poet was roomed across the hall from me in the hotel, and he gave me a pair of shoes when I told him what had happened to mine. When I asked him why he had an extra pair, he said for situations like these. He brought out his Smith Corona and clacked at the keys while I painted, both of us trying to approximate my experience that night as I explained it to him. This was prime time for him to be out on the streets, typing up poems to pay for his room that night. But he had some extra cash to spare, and he could sense that I needed the company. So he wrote and I painted, talking about the movie, the Amstel, the crows, the barefoot walk, anything but what was really on my mind. The time to talk would come later. But right then, right at that moment, I needed to paint. And so I did.