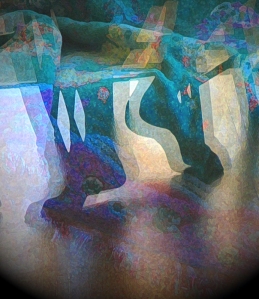 It started with us slow dancing to “Syrup” by Company of Thieves on your fuzzy rug, my feet bare and yours wearing socks with cute skulls on them. Our steps were as tentative as our hands, not quite sure where to place them. Your hair hung in front of your eyes as you looked down to check where your feet were going, and when you looked back up, your eyes caught mine right as Genevieve crooned, “Your love syrup, so sweet, I feel dangerous indeed.”

It felt like we were teenagers again, flirting, laying our words like playful traps and seeing what we’d catch. I hadn’t done this in years, and neither had you. It’s amazing what you can get used to: the monotony of stale love, the painful acceptance that things will never change. But then they did, and we did, and it was awesome.

We were both veterans of abuse and mistreatment, and we agreed that that sort of stuff builds character, but between us we had enough character to last several lifetimes. It was time to just be happy. Every story needs drama, but sometimes that drama needs to be kept safely in the past. So we danced. YouTube’s autoplay algorithm was on point that night, moving seamlessly from one sweet song to the next. After a while it didn’t matter, though. We could’ve danced to anything.

When that was through, we went for a night walk, sky clear and stars shining through. I joked about how back home in Chicago I could hardly see anything because of the light pollution, that you should count yourself lucky you live in North Carolina where the stars are plentiful. We flirted some more as we walked, and I did that thing where I pretended to softly karate chop you. I did it just to have an excuse to touch you, and you knew that. You karate chopped back.

It’s all about timing with these things. You’d just gotten out of a toxic relationship, and I knew you were in no position to commit to anything right away. We danced with our words, too. You needed someone who could accept you “as you are” and do simple things with you like “go on night walks.” I insisted that there was “someone just like that out there” and that “they might be right there in front of you and you don’t even know it.” You needed time, and I was willing to give it to you. You were worth the wait.

Before “Syrup” became our song, I’d listen to it again and again, seeing you in that relationship that was draining the life out of you. I’d wince every time it got to the end of the song, when Genevieve would lament that “it’s a damn shame we couldn’t be.” But dancing with you to that song for the first time, I couldn’t help but smile at those words, almost laugh at them. We were dangerous indeed.

When you needed support, I gave it to you. When you needed to hear that you could do it, I told you you would do it. My words weren’t empty, and you knew that. Years back, I’d been through the same thing, and I’d made it to the other side. And the dances continued, and the karate chops, and the night walks with stars that shifted their position in the sky as the days and weeks passed by.